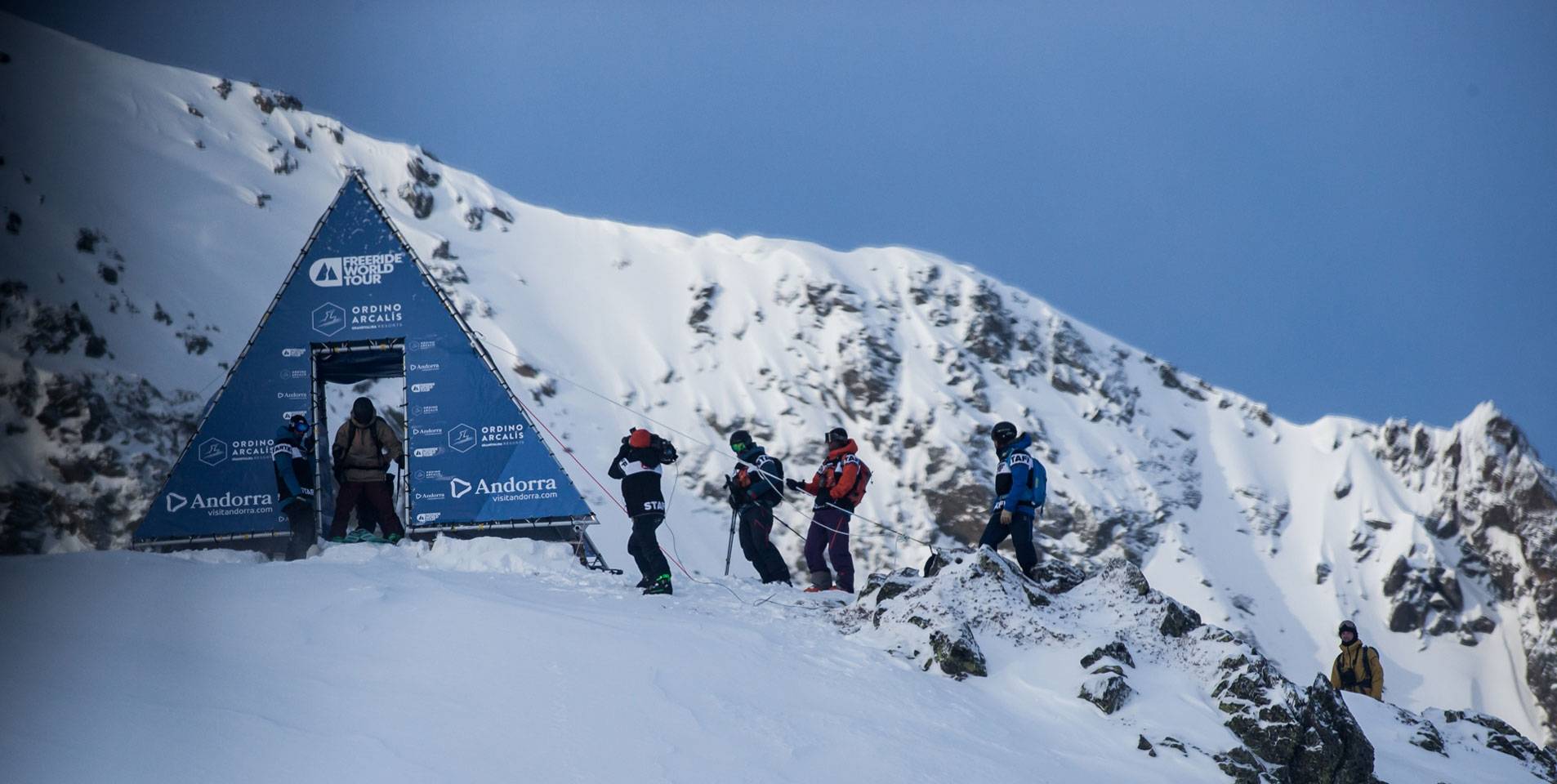 As the snow starts to fall here in Andorra, we’re already dreaming of big powder days and carving untouched pistes at the numerous resorts around the country. And, while not everyone is keen on taking their skiing and snowboarding to the extreme, our mountainous home in the Pyrenees attracts thrill-seekers and daredevils alike – all in the name of freeride.

Hosting the Freeride World Tour Andorra for the sixth consecutive year in 2020, Ordino Arcalís will once again be awash with the world’s best freeride skiers and snowboarders. An international celebration of freeride and a highlight of the winter season, we’ll walk you through everything you need to know about this epic event.

A coming together of the world’s best freeride skiers and snowboarders, the Freeride World Tour (FWT) is an annual circuit of five events across three continents. A true spectacle to witness, athletes are free to make their way down the open course as they see fit; so expect big air, tricky lines and mach speed.

But if you’re new to the world of snow sports, let alone freeride, here’s a crash course on the details.

What Is Freeride Skiing and Snowboarding?

A celebration of skiing and snowboarding in its most natural form, freeride is all about using the natural features of any mountain-face terrain to carve creative lines through cornices, cliff-faces and gnarly couloirs. There’s no grooming of runs, no man-made jumps or half pipes, just riders pushing themselves to their limits and getting crafty with what Mother Nature has to offer.

The ultimate expression of fun and freedom on the snow, freeride is winter sports at its most entertaining. Constantly pushing the boundaries, riders are looking to go big, go fast and go hard.

When Did the FWT Competition Begin?

Like any extreme sport, freeride has morphed over time as equipment improves and the next generation of athletes test the limits of what is possible – having been inspired by the pioneers before them.

While legendary mountainous adventurers were carving out deadly lines on skis as far back as the 1930s, it wasn’t until the 1990s that the sport of freeride began to truly take shape and have official competitions. In 1991, the inaugural World Extreme Ski Championships (WESC) was held on the slopes of Alaska’s Wasatch Mountains, while 1992 saw the first World Extreme Snowboarding Championships.

Even still, it took another decade for the two disciplines to come together in one competition. In 2004 the Verbier Extreme, a snowboard-exclusive event since its inception in 1996, saw ten of the world’s best freeride skiers also compete in the event – and the rest is history.

Marion Haerty cruises through the exposed rock during the 2019 FWT. Image: M. Knoll

How Are Competitors Judged?

Awarding points out of a possible 100, judges evaluate competitors’ overall runs in addition to considering the five following criteria:

In 2020, Ordino Arcalís is once again playing host to this epic event. The third stop of the circuit, the Freeride World Tour Andorra follows on from the competitions in Hakuba (Japan) and Kicking Horse (Canada), before the events in Fieberbrunn (Austria) and Verbier (Switzerland) round out the season.

From February 28 to March 4, 2020, the world’s best riders will descend on Ordino Arcalís to carve out gnarly lines and big air in hopes of walking away with the win. Regardless of whether you’re a snow lover, extreme sports dare devil or neither, the Freeride World Tour Andorra is certainly worth checking out.

Hosting the Freeride World Tour Andorra since 2015, Ordino Arcalís is a popular location for freeriders. With terrain and natural features that welcome all riding styles, and changing snow conditions that deliver plenty of surprises, it embodies the spirit of freeride.

Open to the general public, the two freeride zones within Ordino Arcalís offer 3.4 km of marked routes and 120 km of unmarked areas for intermediate to advanced skiers and snowboarders.

Additionally, having hosted ‘El Dorado Freeride’ – a popular stop on the Freeride World Qualifier circuit – many freeride enthusiasts are familiar with the location.

How Can You Spectate the Event?

If you want to witness all the action of the Freeride World Tour Andorra in person, you’ll need to make your way to the Ordino Arcalís Ski Resort and get a lift pass to access the viewing area.

With an elevation range of 1,940 to 2,625 metres above sea level, transport up to Ordino Arcalís is essential. Thankfully, there are several easy options for getting to the resort.

Upon arriving at Ordino Arcalís, you’ll need a lift pass to make your way up to the action of the Freeride World Tour Andorra. Taking the main chairlift from L’Hortell up to Les Portelles, you can then ski or snowboard your way down to La Coma – where you’ll be able to watch the event.

Just this year, Ordino Arcalís has become part of the Grandvalira Resort group. Lift passes provide access to all ski stations operated by the group, including Ordino Arcalís, Encamp, Canillo, El Tarter, Soldeu, Grau Roig and Pas de la Casa. With a range of pass options available, be sure to check the current prices to determine which pass makes the most sense for you.

Of course, the Freeride World Tour Andorra isn’t the only thing to see or do in the winter in Andorra. If you’re planning a trip during the snow season, check out our following guides with ideas to fill your days and nights, and provide you with everything you need to know for a winter getaway:

Or, if you like to base your travel around big outdoors events, Andorra has plenty on offer including; Maxiavalanche, SkyRace Compapedrosa, the Vallnord MTB World Cup, and the Andorra Ultra Trail.

vamtam-theme-circle-post
Category Events
If you love downhill mountain biking on an epic scale, then Maxiavalanche Vallnord is a...
READ MORE

Andorra Ultra Trail: A Mountain Running Event for EveryoneHow to Celebrate Christmas in Andorra